Joe Kane, whose name became synonymous with home theater calibration upon the creation of the original Video Essentials 10 years ago, has now created the preeminent audio/video calibration tool: “Digital Video Essentials HD DVD.” One side of the disc features both 1080p and 720p Test and Demonstration materials, and also introduces 6.1 channel Dolby Digital Plus and Dolby Digital True HD. The second side is presented in Standard Definition, in NTSC or PAL format. “Digital Video Essentials HD DVD” was produced in cooperation with Microsoft Corporation and Deluxe Laboratory, and is available now from DVD International at a suggested retail price of $34.95.

“There is no question that Joe Kane is considered the father of the audio/video calibration tool, and we’re proud to have been associated with each of his programs over the past 10 years,” said David Goodman, President, DVD International. “This new version of Digital Video Essentials provides consumers with easy access to a multitude of calibration test patterns, which have become an increasingly important part of owning a High Definition home theater, as the High Definition industry grows and matures.”

“New video formats need test and demonstration materials as a benchmark for performance,” said Kane. “Digital Video Essentials HD DVD is a quality reference for what can be done in the HD DVD format. As Hollywood continues to offer some of the finest examples of high definition programming, consumers need to become educated as to HD’s potential. Digital Video Essentials HD DVD is the ideal starting point.”

“Digital Video Essentials HD DVD” combines both 720p and 1080p VC-1 encoded materials (the first time 720p has been used in HD DVD), and includes a 720p/60 demonstration. The VC-1 codec was chosen because it delivers the best looking pictures available in HD DVD. Critical test materials particular to 720p or 1080p were created in that domain and have not been converted. The program also includes extensive use of text files to drive the menu system, as well as test patterns such as Reverse Gray Ramps with Steps, Shallow Ramps and Colored Ramps which have been properly generated in HD.

In addition, side two of the disc features a standard (SD) definition version of Digital Video Essentials DVD, including an audio/video tutorial for both formats.

A future edition of “Digital Video Essentials HD DVD” is already being planned, and will include additional languages. Support documentation for the calibration disc can be found at DVE HD.

Joe Kane Productions (JKP) was founded in 1982 with the intent of assisting the video industry in improving the quality of video. Through work with the Hollywood post production community and the Society of Motion Picture and Television Engineers (SMPTE) it became clear that there was a need for an easy to understand description of how video should be displayed. In 1988 Mr. Kane illustrated the SMPTE specification for display device setup in a laserdisc program called A Video Standard. It became the first widely distributed illustration of how video is supposed to work and was the beginning of a critical reference for television. That was followed by Video Essentials on laserdisc in 1996 and on DVD in 1997. Contact Joe Kane Productions at www.videoessentials.com 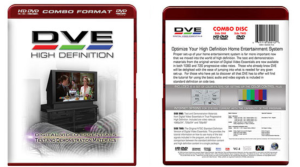